I assign a “Neutral” rating to Hong Kong-listed mobile game developer and publisher, IGG Inc. (OTCPK:IGGGF) [799:HK]. IGG’s revenue and net profit were down -11% and -13% YoY in FY2019, in tandem with the decline in average monthly billings for the company’s flagship games, Lords Mobile and Castle Clash. IGG’s key challenge is that the company is still too reliant on its two flagship games launched years ago, and the market is waiting for the company’s next big hit before the stock’s valuations can be positively re-rated.

A “Neutral” rating for IGG is warranted. While IGG’s valuation remains attractive with P/E multiples in the single-digit, on top of a strong net cash balance sheet, there is little certainty if and when IGG will come up with a new blockbuster game that is as successful as Lords Mobile and Castle Clash.

Readers are advised to trade in IGG shares listed on the Hong Kong Stock Exchange with the ticker 799:HK, where average daily trading value for the past three months exceeds $6 million and market capitalization is above $700 million. Investors can invest in key Asian stock markets either using U.S. brokers with international coverage, such as Interactive Brokers, Fidelity, or Charles Schwab, or local brokers operating in their respective domestic markets.

Started in 2006 and listed on the Hong Kong Stock Exchange in 2013, IGG is a leading developer and publisher of mobile games, more specifically those in the strategy category. Headquartered in Singapore, the company has regional offices in 14 other countries in North America, South America, Western Europe, and other parts of Asia; and the company boasts a registered user base of approximately 740 million across more than 200 countries globally as of end-FY2019. IGG derived 43%, 26%, and 25% of its FY2019 revenue from Asia, North America, and Europe respectively, with other markets accounting for the remaining 6% of the company’s revenue last year.

IGG’s flagship game is “Lords Mobile” (Real-Time Strategy/Role-Playing Game or RTS/RPG) that was first launched in March 2016, which accounted for 80.7% of the company’s revenue for FY2019 with 8.2 million active users at the end of last year. The company’s prior hit was “Castle Clash” (strategy game) which was first introduced in July 2013. “Castle Clash” has 3.4 million monthly active users at the end of 2019 and contributed approximately 11% of revenue. None of the company’s other games accounted for more than 4% of IGG’s FY2019 revenue.

IGG’s revenue and net profit were down -11% and -13% YoY at $667.6 million and $164.8 million respectively for FY2019. This was largely attributable to a decline in revenue for the company’s flagship games.

Revenue from Lords Mobile declined -10.2% YoY to $539.0 million for FY2019, while Castle Clash saw an even larger drop of -31.1% YoY to $75.9 million last year. This is not unexpected since all games have their own life-cycles, and Lords Mobile and Castle Clash were launched many years back in July 2013 and March 2016 respectively. In the company’s FY2019 financial results announcement, IGG referred to the decline in revenue for Lords Mobile as a “natural drop.”

However, it is still a concern that the decline in average monthly gross billing for Lords Mobile seems to have accelerated in 2H2019, as per the chart below. 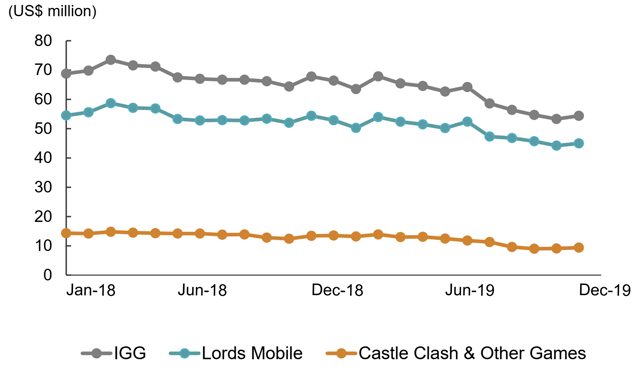 At the company’s FY2019 earnings call on March 5, 2020, IGG clarified that the decline in average monthly gross billing for Lords Mobile “was just a temporary phenomenon” and monthly active users have picked up again in January 2020. The company explained that it was focused on user acquisition for Lords Mobile in South Korea and Japan in late-2019. As a result, new user growth for Lords Mobile decreased towards the end of last year because user acquisition costs are significantly higher in these two countries compared with other parts of the world, and the company commits to a fixed quantum of marketing spend every month.

Monthly active users for Lords Mobile almost halved from 16.0 million as at end-1H2019 to 8.2 million as at end-FY2019, but the number of monthly active users has since recovered to be above 10 million in January 2020. In addition, IGG highlighted at the company’s recent FY2019 earnings call that “the revenue (from Lords Mobile in February) is a lot improved from January” which it attributed to “new content and new methods of play.” Some of these changes will enable experienced gamers to find new challenges and increase their engagement, but it could also potentially discourage new gamers as the level of game difficulty increases.

At its FY2019 earnings call on March 5, 2020, IGG emphasized that it is targeting for monthly active users for Castle Clash to “be maintained at a stable level” driven by a “launch (of) a new big upgraded version” of the game in March 2020. In the company’s FY2019 results announcement, IGG referred to the upgrade of Castle Clash in March 2020 as “its biggest ever update since its launch in 2013” which will offer “existing and new gamers a refreshing new experience.”

It remains to be seen if IGG can maintain or at least stem the decline in average monthly gross billing and monthly active users for the company’s flagship games, Lords Mobile and Castle Clash.

As detailed in the preceding section, IGG’s key challenge is that the company is still too reliant on its two flagship games that were launched years ago, which are in the late stages of their respective life-cycles and experiencing revenue declines.

IGG launched more than 10 new games in FY2019, which included games in new genres such as casual games and simulation games, that represented a departure from the company’s core strength and focus in strategy games. Nevertheless, Lords Mobile and Castle Clash still accounted for a combined 91% of IGG’s revenue last year. Looking ahead, IGG’s new games in the pipeline for FY2020 include more casual and simulations games, a shooting game, and a MOBA (multiplayer online battle arena) game.

The company cannot be faulted for not investing in the development of new games. IGG’s research & development or R&D expenses grew +45% YoY from $63.6 million in FY2018 to $92.5 million in FY2019, while the R&D expenses-to-revenue ratio increased from 8% to 14% over the same period. At the company’s FY2019 earnings call on March 5, 2020, IGG guided that “R&D expenses will be maintained at the current level.” On the positive side of things, IGG continues to invest in R&D expenses to develop the “next big hit” to make up for the revenue decline for Lords Mobile and Castle Clash. On the negative side of things, maintaining R&D expenses at such a high level will be a drag on IGG’s profitability in the near term.

IGG also continues to explore new ways of growing revenue from its gaming business, and these include taking an equity stake in other gaming companies, outsourcing certain R&D work to external teams, and acting as the international distributor for other companies’ games.

Nevertheless, the game development industry works on a business model involving large sums of money being spent to develop or identify a few blockbusters and big hits, with investments in most games being loss-making or break-even at best. Notably, when asked by investors at the recent FY2019 earnings call which of the new games could be potentially big hits, IGG replied by saying that “it is difficult to say” and “in the past, whenever I made a choice or a judgment, I was wrong.” This suggests that it is impossible to predict which specific new game will do well and parallel the successes of past hits like Lords Mobile and Castle Clash.

IGG offers a trailing twelve months’ dividend yield of 6.8% and a consensus forward FY2020 dividend yield of 4.1%. IGG’s capital return to shareholders has been decent. The company’s full-year dividends per share of HK$0.306 for FY2019 implies a 30% dividend payout ratio. If share repurchases were included, IGG returned approximately 46% of its earnings to shareholders last year. Market consensus expects IGG to maintain its 30% dividend payout ratio for FY2020, but dividends per share are estimated to decline to HK$0.19 in FY2020 in line with a -35% YoY decline in earnings per share this year.

Nevertheless, IGG does not have a dividend policy in place. In the company’s FY2019 financial results presentation, IGG stated that “the future dividend payout ratio will be formulated in consideration of the Group’s profitability and funding need for M&A.” A cut in dividend payout ratio in the future can’t be ruled out, notwithstanding the fact that IGG has a strong balance sheet with net cash accounting for approximately 41% of its market capitalization.

The key risk factors for IGG are flagship games such as Lords Mobile witnessing a larger-than-expected decline in revenue going forward, new games performing below expectations, new regulations that have a negative impact on the gaming industry in markets which IGG operates in, and lower-than-expected dividends in the future.

Disclosure: I/we have no positions in any stocks mentioned, and no plans to initiate any positions within the next 72 hours. I wrote this article myself, and it expresses my own opinions. I am not receiving compensation for it (other than from Seeking Alpha). I have no business relationship with any company whose stock is mentioned in this article.

8- in some ways How to Grow Your Small Businesses